. . . just 5 days after I was diagnosed with uterine (endometrial) cancer.

Three years later, I am grateful to be a cancer survivor. And I want to hear more women diagnosed with this disease say the same thing.

More than 60,000 American women will develop uterine (endometrial) cancer in 2016—and 10,000 of them will die of it. Most of this disease’s victims are over the age of 60, but it can strike women of any age.

Uterine cancer doesn’t get much media attention. And if women don’t learn to recognize the risk factors and symptoms,* and get timely, proper treatment, their lives may be compromised—and even shortened.

By raising awareness of this fourth most common cancer in United States women, and the most common gynecologic cancer, we can help stop this disease from killing the organ that gives us life.

The mission of our sister site, The Patient Path, is to provide informative and inspiring personal stories, supplemented with well-documented, highly reliable sources of information and support. Its goal is to educate, enlighten, encourage, and empower women to be full partners with their healthcare teams. .

Please visit often for exciting updates, including more stories of uterine cancer (read how mine began here), other stories of gynecologic and breast cancer (see Diane’s Story), new media content, webinars, and live events. Also see the stories on this site for additional healthcare stories and resources that help all patients navigate the healthcare system.

*My only symptom was postmenopausal vaginal bleeding. Like the presidential election result of early today, November 9, 2016, uterine cancer blindsided me: I never saw it coming.

Centers for Disease Control and Prevention

Final lessons from a pretty, but fragile, aqua bulb lamp. 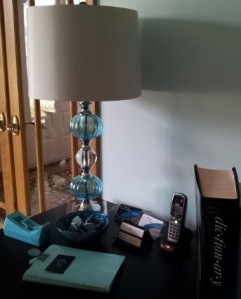 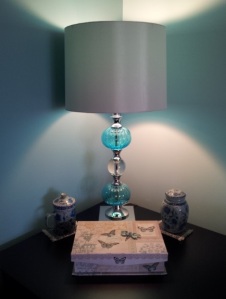 Last weekend, I got the call from Pier 1 that my “new new” lamp was finally in. I had broken the “old new” lamp 10 days before while making the purchase and had felt so bad about it I had to do something with the experience. That something was the March 6, 2014 post. I had waited patiently for the new lamp so I could properly illuminate my office with this second lamp on my second desk.

I went to pick up the lamp and was helped by a different store clerk than the one who’d helped me previously. Thankfully, this lamp, unlike the other one, was in a box and not just bubble-wrapped. Then I looked at the top of the box, which, strangely, was printed with a different model name on it. The clerk called the manager over, a different one and not the one who had helped me during the initial purchase. The manager offered to unpack the lamp so I could make sure it was the correct one. On second glance, the correct model name was printed on the sides of the box. Odd. We opened it, and “my” lamp was inside despite the identity confusion on the outside. I quietly took my new lamp home, eager to set it up on my second desk.

While putting it together, I saw that the threaded top where the finial is screwed on to secure the lamp shade had been soldered on crooked, which meant the lampshade pitched forward. Hmmm.

So, I called the 800 customer service number, and the representative said I could swap out the lamp for a new one. I couldn’t bear to do this again, and she offered to call the Flemington store on my behalf to see what they could do. She did, and the store had another lamp in stock (in case I should need it?). I called the store and spoke with the manager, who had already dealt with me once that day, but she was agreeable and she said I could swap out either the harp or the entire lamp. I took the bent harp and went back to the store.

While the manager was unpacking the stock lamp, the first young woman who had sold me the one I’d broken 10 days before appeared. She didn’t recognize me, but I “confessed,” and the manager said with mock anger, “Oh, she‘s the one.” They were good natured, but I was uncomfortable and wanted to turn the experience around. So I thanked them for being so nice about the situation and told them about the story on the blog. The young woman looked it up on her smart phone and seemed eager to read it, especially after I said I’d complimented her and the store for their handling of my bungling. I swapped out the harps and left the store, feeling that all had ended well.

When I got home, I finished setting up the second lamp and stood back to admire how softly pretty and glowing my office looked. Then I took the box to the garage and thought about the two different model names on it, unsure of how such a thing could happen. But I decided to take it as a final message about the entire lamp experience. Whereas the first lesson was about the paradox between sturdiness and fragility, and then how vulnerability can become strength once again in the human heart, this lesson seemed to be about patience. But more than that.

This final lesson was also about identity. Just as sturdiness can mask vulnerability, external labels can create confusion about what’s inside. In this case, the true thing–my lamp–was inside a box with two names. Currently, I am working on a story about identity for my writing group, so the occurrence of labeling ambiguity has symbolic meaning that I will be exploring more deeply as I continue to write.

In the meantime, though, I am thankful that the “wrong” name was on the top of the box. Because that name was Sophia–Greek for “wisdom.”

Lessons from a pretty, but fragile, aqua bulb lamp.