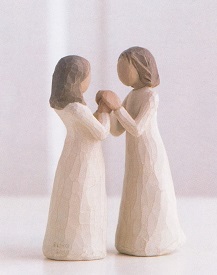 “I think you should do it.” Ah, spoken like a typical “baby sister.” Of course. I was the oldest. I was supposed to be the “responsible” one.

I suggested to Vicki that we meet that coming Saturday, August 15, 2009, to exchange copies of papers and photos. She was utterly fascinated with what we all looked like–or more particularly, whether she looked like any of us. After we decided that “the middle” was the Stockton Inn, just across the bridge from PA in NJ, I emailed her some photos. She said later that she couldn’t stare at them hard enough. I think she was looking for parts of her lost self in our faces.

And speaking of middles. . . . After Vicki and I hung up, a first-step plan in place, I called “our” brother to give him the momentous news. “Great. Now I have middle-child syndrome.” After I stopped smirking on my end of the line, I said: “Well, I used to be the older child–now I’m the oldest!” He’s the comedian; I’m the grammarian.

Then I told him the story and asked him the same question: who should tell our mother?

“I think you should do it.” Ah, spoken like a typical younger “middle child” brother. Of course. I was the oldest. I was supposed to be the “responsible” one.

Discussing names–it felt odd to us that we had a “new” sister named “Vicki”–Wayne decided how to work around the “but our sister’s name was Susan” problem: “I think we should call her Vicki Sue.” And so we did–and still do.

First things first. I had to meet our sister before I could tell our mother we’d found her–or, rather, that “Vicki Sue” had found us. I felt it was vitally important to be sure there were no sad mistakes before we made the big announcement.

I did make a couple of more phone calls that night. First, I called Emily, my deceased father’s wife. She was so happy for us: “God bless you all!” Emily passed away last year, never having had the chance to meet the Vicki she’d spoken to on the phone that August day in 2009. But I’m sending her a posthumous thank you through this story for helping to bring us together.

Another call I made that evening was to . . . you guessed it, Sandee. Her life was so busy that she rarely had time to talk on the phone unless she was in the car. I caught her as she was driving home from work. “Sand! You’ll never believe what just happened! I found my long-lost baby sister!” “You wha. . . .” Her phone battery died. She couldn’t call back until the next day, rampant curiosity and nervous excitement notwithstanding. That’s just how full Sandee’s life was.

When the phone rang the following day, she just picked up where she’d “dropped” off: “You what!?” As I told her, I heard more giddy laughter than I’d ever heard come out of her before. Oh, and I heard plenty of caterwauling about her dead phone. “Serves you right,” said I. “You talk too much!” (Long-time friends can say these things to each other.) I resumed: “And guess what else? She’s Jewish!” Well, the happy squeals and “I can’t believe its” on the other end of the line competed with gleeful laughing as we both remembered that, when we were kids, Sandee used to say I was more Jewish than she was. This wasn’t true, of course, but it was our longstanding joke. Between giggles and gulps, she said: “When do I get to meet her?”

I told you this part of the story in last Friday’s post–they met at my house two months later, at our family’s first “Oktoberfest,” a truly happy event. They never met again.

Saturday, August 15, finally came. Last evening, my husband and I drove through Stockton, NJ on our way to PA to see my mother, and all the memories flooded over me, washing away the past four years. And I’m remembering them so clearly this morning as I sit watching a light snow turn our landscape into a Christmas card.

“What happened!?” “The other lady got here early. She was pacing and looking so nervous and as if she was about to cry, so we asked her whether she was all right. She told us the whole story!”

They led me to the garden waiting area, where I beheld my baby sister–who would be turning 50 exactly one month later–for the first time. The Willow Tree picture in these posts–the “Sisters by Heart” statue–captures the essence of that first reuniting embrace. Vicki Sue gave me that statue at our first Christmas together, four years ago already, in 2009.

After we hugged for some indeterminate moments, we went to our table, where a tearful waitress brought us some wine for a toast. Even though it was only the two of us, we had each brought with us, in spirit, 50 years of family and life that we would soon reveal to each other, words tumbling over bites of food and sips of wine, spilling out through smiles, splashing past happy tears. The occasion felt as profoundly important as any ceremonial day I’d ever experienced.

In case you’re wondering: Yes, the information on the papers matched. Her adoption papers and “my” birth registration contained the same data. But by that point, I didn’t need facts. As Vicki Sue took off her glasses, I looked into the eyes of my much younger mother from deep within an early childhood memory, still such an integral part of my adult mind. It was a strange, eerie feeling. VS didn’t look that much like my mother, just a little. But when she removed those glasses, it was our mother’s eyes I was looking into, the long-ago mother-child bond impossible to recall at will–and equally impossible to destroy by time. Although Vicki Sue would not look into those same young-mother eyes, she would look into the windows of her biological mother’s soul. Soon. Very soon.

Yet Vicki Sue’s eyes aren’t even the same color as our mother’s. My parents, brother, and I all have hazel eyes. But my mother’s sister–Aunt Ceil–has very pale blue eyes. And these are the color of Vicki Sue’s. Interestingly, VS resembles Aunt Ceil, who has lots of nieces and nephews, but no children of her own. And I almost forgot yet another coincidence, which I was reminded of last night when I stopped in to see Ceil on the way to pick up my mother for dinner: That summer of 2009, just a couple of weeks before Vicki Sue appeared from the ether, I told Ceil about my long-lost baby sister, just after she’d finished telling me a wonderful story about her long-lost high school friend.* Believe it or not, Ceil had never known about her sister’s “lost” child. About two weeks later, my aunt and I both felt as if we’d manifested Vicki Sue just by talking about her!

By the end of that lunch at the Stockton Inn, my sister and I–no DNA test could make us any surer that we were just that–had made a plan. She would meet our brother and his family the following week. But in the meantime, I had a very important job to do.

How do you tell your 79-year-old mother that she now has three children–and two more grandchildren–to buy birthday, Christmas, and Chanukah gifts for?